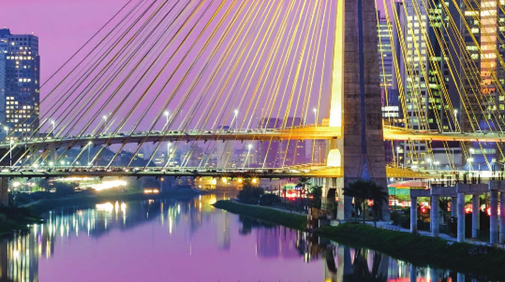 Brazilian equities have rallied roughly 15% since the publication of our White Paper, Brazil: A Stock Picker's Market, on February 24th.  We continue to see strong momentum for the Brazilian stock market through 2021 but are growing cautious beyond year-end. Brazil experienced some of the world’s worst COVID-19 contagion and death rates, but the country now appears to have turned the corner. In Brazil, over 60% of the adult population has already received a dose of the vaccine[1]. For the over 60-year-old population, that figure is now close to 95%[2]. We see a downward trend of new cases and deaths and believe there are significant opportunities in brick & mortar retailers, hospital companies, banks, and idiosyncratic technology stories.

We are also encouraged to see improved economic policies lobbied by Finance Minister Paulo Guedes provide the country a blueprint for long-term sustainability, focusing on future privatizations, trade liberalization, and further tax reform. In February of this year, the government declared independence for the Central Bank. The institution has prudently begun raising interest rates after a multi-year period of cuts, falling 12.25 percentage points from January 1, 2016, to January 1, 2021, which has led to support for the Brazilian Real (BRL). Notably, Brazilian corporates have de-levered, making higher rates less of a headwind than in previous cycles. Though we see an opportunity for continued positive earnings revisions, we are cautious of increasing political rhetoric towards the second half of this year. Brazilian politicians will begin campaigning for the 2022 Presidential Election, in which former President Lula has already declared his intention to run.

Vaccines are leading to recovery

As of July 23, 2021, Brazil is vaccinating roughly 1.4 million people per day[3], leading to a dramatic activity improvement. Daily new deaths data has shown a persistent downward trend across most regions, reaching the lowest level since the first quarter. Occupancy rates of COVID-19 intensive care unit (ICU) beds continue posting significant improvements nationwide. As of July 23, 2021, 98.1 million Brazilians have received at least one dose (61% of the adult population) and 37.0 million (23% of the adult population) have received the 2nd dose or a single dose making them fully vaccinated[4]. 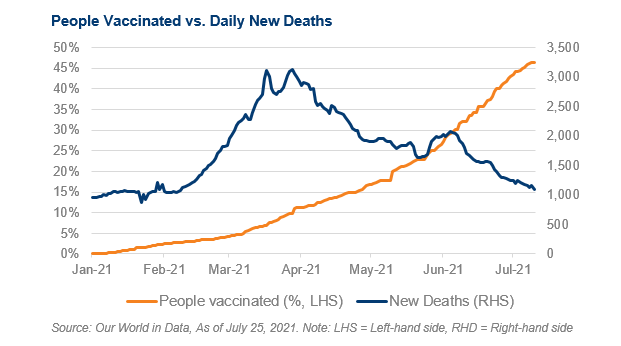 Economic reforms are still moving in the right direction

Finance Minister, Paulo Guedes, continues to push through his orthodox agenda. His efforts have already led to privatization proposals, independence for the Central Bank, steps away from Import Substitution Industrialization, and tax reform.

After multiple years of interest rate cuts – the Central Bank’s monetary policy committee had cut rates from 14.25% to 2% since 2016 – the now independent Central Bank has steadily raised rates to 4.25% in an effort to curb inflation. We see this as a prudent maneuver ahead of rebounding growth. We are encouraged to see the BRL strengthen versus the US dollar (USD) now that the interest differential is expanding again. 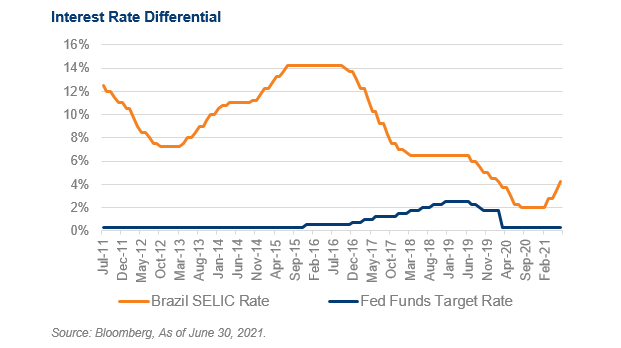 However, debt has become less of a problem for corporates

The 2014-2016 Financial Crisis forced companies to review their financing structure and reduce their exposure to unhedged foreign debt. That said, Brazilian corporates entered the COVID-19 crisis in a much healthier financial situation than the last fiscal crisis. The reliance on USD financing sources has sharply diminished, with local capital markets taking over this role. In addition, the Brazilian Development Bank’s (BNDES) reduction of its share in local debt markets has allowed for more significant development of the local debt capital markets. Brazilian corporates are now only levered 1.8x Net Debt/EBITDA compared to their peak of 7.6x in 2015.

And valuations are attractive

At 9.3x price-to-earnings (P/E), Brazilian equities are trading 1.7 standard deviations below their historical average. This divergence is notable, as return-on-equity (ROE) profiles are expanding at the same time. 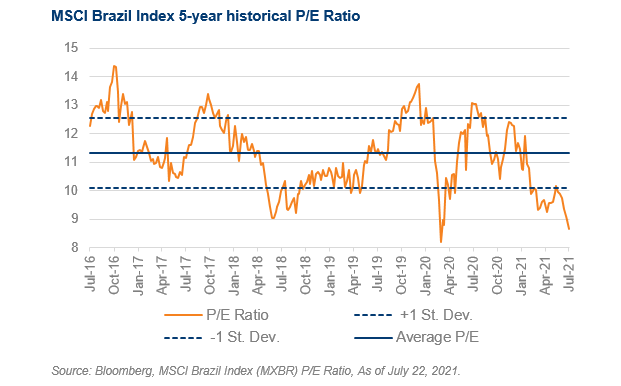 In a recent poll by Datafolha, data released on July 8, 2021, showed continued erosion of President Bolsonaro’s popularity, 51% of Brazilians disapproved of Bolsonaro up from 45% in the previous poll in May and the highest since he took office in January 20219.  The poll also showed a wide advantage for former President Lula in the 2022 race with 46% of the intended votes for 2022 vs. Bolsonaro with 25% in a first-round scenario. At the same time, President Bolsonaro is also primitively challenging any election result where he is not a winner, saying that the results of the race might not be recognized. The President argues that it is very easy to fraud the electronic ballot. He is calling for a paper ballot along with the electronic one, which could add to voter confusion. We expect former President Lula to pick up his campaign in the fourth quarter of 2021, which could spur spending and unorthodox programs from the current regime, which may put pressure on the BRL. Though we remain months away, it appears this will be a polarized election that could potentially bring volatility into 2022.

Brazilian Development Bank (BNDES) is the main financing agent for development in Brazil.

MSCI Brazil Index (MXBR Index) is designed to measure the performance of the large and mid-cap segments of the Brazilian market. With 54 constituents, the index covers about 85% of the Brazilian equity universe.

Net debt-to-EBITDA (earnings before interest depreciation and amortization) ratio is a measurement of leverage and shows how many years it would take for a company to pay back its debt if net debt and EBITDA are held constant.

Price-to-earnings ratio (P/E) is the ratio for valuing a company that measures its current share price relative to its per-share earnings.

Return on equity (ROE) measures a corporation's profitability in relation to stockholders’ equity and is calculated by dividing net income by shareholders' equity.

Standard Deviation (St. Dev.) is a statistic that measures the dispersion of a dataset relative to its mean. 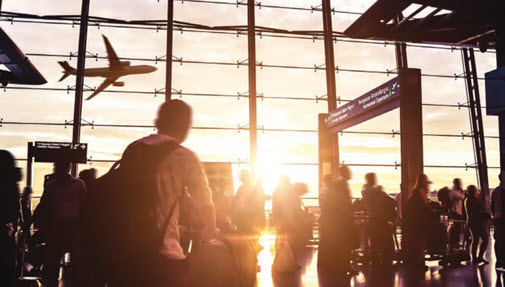 Despite strong recent performance, and a supportive environment in the form of a weaker US Dollar, [Read More]

The Rise of Online Grocery in China

Online grocery has been a rising star within the e-commerce industry in the past year. It is one of [Read More] 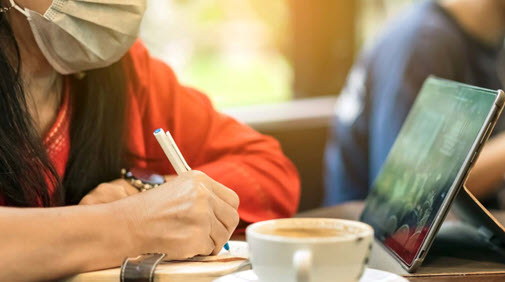 E-commerce Opportunities Outside of Asia

The Covid-19 pandemic, which led to lockdowns around the world, changed the way people purchase [Read More]